The meaning of mawla is what has divided the Sunni and Shia communities for centuries. In this brief article, we will be discussing the most common interpretations of the term.

With the above in mind, it becomes clear why the vagueness of the text is an issue according to Sunnis. A word that has so many meanings cannot be the most useful word for an appointment. In this article, we shall shed some light on some of the most commonly used interpretations.

Shia Context and Chosen Interpretation of the meaning of mawla

Due to the sheer amount of differences in the possible meaning of mawla, the only way that one can arrive at a conclusion is by providing a context.

Shias suggest that the context of the Ghadir Khumm events revolved around the verse that was revealed in which the Prophet (peace be upon him) was told, “O Messenger, deliver what was revealed to you from your Lord, and if you do not, then you have not delivered your message, and Allah protects you from the people.” (5:67)

According to the Shia interpretation, this verse was revealed as an order for the Prophet (peace be upon him) to appoint Ali. With this in mind, Shias often use terms #22 or #23 to suggest that Ali is the next in line to rule.

They also mention additions in which certain companions approach Ali in order to congratulate him on his alleged appointment. This furthermore promotes the interpretation that they have selected. However, these narrations have been debunked as false historical narrations that fall under the least amount of scrutiny.

Sunni Context and Chosen Interpretation of the meaning of mawla 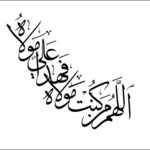 Sunnis, on the other hand, relate a completely different context. We have provided the narrations in another article, but in brief, the context revolves around Ali being sent to Yemen while in charge of troops. After conquering the enemy, he takes a slave-girl for himself. Certain Companions, like Khalid bin Al-Waleed and Buraida, are infuriated, since they wanted the slave-girl for themselves and felt that Ali had no right in splitting bounties the way that he did. When they approach Ali, he points out that he took the slave-girl as a part of his khums, since a portion of it goes to the family of the Prophet (peace be upon him) as per Surat Al-Anfal verse 41. However, those Companions did not see it as fair and they complained to the Prophet (peace be upon him).

One of the main narrators of this context, Buraida, states that the Prophet (peace be upon him) said, “Whosoever I am his mawla then Ali is his mawla.”

Sunnis provide two main explanations for the meaning of mawla based on the one context provided above.

1- Al-Bayhaqi in Al-I’itiqad p. 355 relates the opinion of Al-Shafi’ee who said, “This refers to the alliance of Islam, as per the words of Allah that ‘Allah is the mawla of those that believe, while the unbelievers have no mawla.’ (47:11)” In other words, Al-Shafi’ee chose term #13 to suggest that the Prophet (peace be upon him) referred to Ali as the ally of the Muslims, and therefore, he should not be hated, but loved.

2- Ibn Zanjawaih in Al-Rawdh Al-Aneeq p. 569 provides a more direct interpretation from Abi Thawr, an Imam of fiqh in the third century, in which he holds chooses term #6. This interpretation fits in directly with the most common usage of the word in the Arabic language, which is a slave and slave-master relationship. Moreover, it is directly related to the slave-girl incident, since the Prophet (peace be upon him) is defending Ali’s right to keep the slave-girl. In other words, he is saying, “Whoever I am a slave-master to, then Ali is also his slave-master.” Abu Thawr comments that this is an accurate statement since a freed slave of an individual will always and forever be associated with his master’s tribe as a whole. An example of this includes Bilal bin Rabah Al-Taymi. Even though he is from Ethiopia originally, he was the freed slave of Abu Bakr (who is from the tribe of Taym), and due to this, he will forever be a mawla of the whole tribe of Taymi.

Based on the context, the most correct interpretation is the opinion that is provided by Abi Thawr. The opinion provided by Al-Shafi’ee could also be accepted, however, it is not as direct and related to the exact context that the Companions provided. As for the Shia interpretations, it has become clear that they do not have an authentic context that supports their view of the meaning of mawla.