One of the factors that is often overlooked when discussing Ghadir Khumm is its location.

Yaqoot Al-Hawami, in his encyclopedia of locations Mu’jam Al-Buldan 3/36 points out that Ghadir Khumm is a pond that is located only two miles away from Al-Juhfa. Al-Juhfa is a town that is located between Makkah and Madinah, and it is the miqaat for those that visit the Ka’aba from Syria and Egypt. 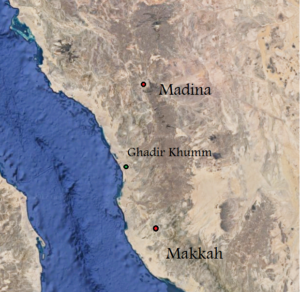 Yaqoot 3/248 also states that Ghadir Khumm used to be a picnic spot during the pre-Islamic era and the early years of Islam.

Specifically, there are 180 kms between Makkah and Ghadir Khumm.

Interestingly, the fact that Al-Juhfa is used as a miqaat today was abused by Shias, including Al-Amini 1/33, who stated that it was the place in which the Madanis, Iraqis, and Egyptians would gather, in order to give Ghadir Khumm greater significance. However, it is important to keep in mind that Islam was yet to spread to Egypt and Iraq at the time of the life of the Prophet (peace be upon him) and that the vast majority of those that accepted Islam during the life of the Prophet (peace be upon him) came from Madinah, Makkah, Ta’if, Bahrain, and Yemen, as well as the bedouins from within the Arabian Peninsula.

Why Stop at Ghadir Khumm?

A common question that Shias ask is: Why did the Prophet (peace be upon him) stop at Ghadir under the blazing sun? They then answer: He stopped to appoint a successor.

Shias suggest that the Prophet (peace be upon him) has no reason to stop in his trip from Makkah to Madinah. However, by merely being aware that Al-Madinah is around 350 kms away from Makkah, it become clear that it is normal to take several stops during the journey.

Ibn Katheer in Al-Bidaya 5/117 points out that the Prophet (peace be upon him) left Madinah to perform the pilgrimage five days before the month of Thi Al-Hijjah. He arrives in Makkah five days into Thi Al-Hijjah. In total, the trip took around ten days, and it is natural for one to stop along the way several times during such long journeys.

One of the common questions that Sunnis often ask Shias is: Why didn’t the Prophet (peace be upon him) make his declaration in Makkah during Hajj?

Truly, this is one question that Shias have no good answer for.

There is not a single good reason for the “Ghadir declaration”, which is supposed to be binding upon all Muslims, to have been made after leaving Makkah. This is because the Muslims of Makkah, Ta’if, Bahrain, and Yemen would be excluded from witnessing this alleged declaration since it happened at Ghadir.

Instead, we find the Prophet (peace be upon him) giving the following speech from Saheeh Muslim (from the narration of Al-Sadiq from Al-Baqir from Jabir Al-Ansari) being given at the pilgrimage:

“Verily your blood, your property are as sacred and inviolable as the sacredness of this day of yours, in this month of yours, in this town of yours. Behold! Everything pertaining to the Days of Ignorance is under my feet completely abolished. Abolished are also the blood-revenges of the Days of Ignorance. The first claim of ours on blood-revenge which I abolish is that of the son of Rabi’a b. al-Harith, who was nursed among the tribe of Sa’d and killed by Hudhail. And the usury of she pre-Islamic period is abolished, and the first of our usury I abolish is that of ‘Abbas b. ‘Abd al-Muttalib, for it is all abolished. Fear Allah concerning women! Verily you have taken them on the security of Allah, and intercourse with them has been made lawful unto you by words of Allah. You too have right over them, and that they should not allow anyone to sit on your bed whom you do not like. But if they do that, you can chastise them but not severely. Their rights upon you are that you should provide them with food and clothing in a fitting manner. I have left among you the Book of Allah, and if you hold fast to it, you would never go astray. And you would be asked about me (on the Day of Resurrection), (now tell me) what would you say? They (the audience) said: We will bear witness that you have conveyed (the message), discharged (the ministry of Prophethood) and given wise (sincere) counsel. He (the narrator) said: He (the Holy Prophet) then raised his forefinger towards the sky and pointing it at the people (said):” O Allah, be witness. 0 Allah, be witness,” saying it thrice.”

The sermon above includes significant matters that encourage peace, the condemnation of vengeance, the abolishing of usury, the promotion of women’s rights, and the importance of holding onto the Qur’an. However, the most important issue, the alleged appointment of Ali, was not mentioned at all. Instead, the Ghadir sermon occurred around a week later in a location that was nowhere as significant, in front of a much smaller group of people.

The setting of Ghadir Khumm gives us a clear indication of the intentions of the Prophet (peace be upon him) when he spoke, “Whosoever I am his mawla then Ali is his mawla.” Surely, if his intention was appointment, then this event would have taken place in front of the largest possible crowd, during the Hajj a week earlier.