Golden Words from the Great-Grandson of Ali 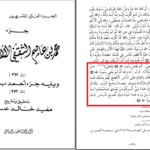 When attempting to understanding whether the event at Ghadir Khumm was a declaration of the Imamate of Ali, there is no better source than Ahlulbayt themselves in determining the meanings behind the words.

Mohammad bin ‘Asim Al-Thaqafi in his Juz’ (42) narrates authentically from Shababa from Fudhail bin Marzooq that an extreme Shi’ee asked Al-Hasan, “Didn’t the Messenger of Allah say to Ali, ‘Whosoever I am his mawla then Ali is his mawla?’”

By Allah, if he meant rule and authority then he would have been clear about it in the same way that he was clear about prayer, alms, fasting Ramadan, and the pilgrimage. He would have said, ‘O’ people, Ali is  walee amrikum (the caretaker of your affairs) after me, so listen to him and obey him!’ For the one that had the best interest of his people was the Messenger of Allah (peace be upon him).